Kenwood car stereos are user-friendly and dependable pieces of equipment. In addition, it has an easy installation process for anyone with some level of knowledge about car electronics.

However, you should see a car professional if you want to upgrade or sell them or if you simply want to inspect the wiring on the back of the stereo. If you are sure about what you are doing and don’t want to take the hassle of going to a mechanic just to swap a car stereo, stick with us.

In this article, we will teach you how to remove a Kenwood stereo from a car with simple and easy steps. We are going to divide the process into multiple stages for your ease.

Is This Process Applicable For Kenwood Car Stereo Only?

You may be wondering if this process is only about Kenwood Stereo Removal. We will take the Kenwood Car Stereo System as a reference in this article and work on all major car stereos.

Yet, most car stereo systems use the same kind of mounts for installation. So this article will help you even if you don’t have a Kenwood Stereo System. But, If you are a Pioneer user you can check this article where we provided some independent steps for pioneer users to remove their pioneer car stereo easily. Now, Let’s get into the steps to remove Kenwood Car Stereo.

Step 1: Turn off the car and stereo

Pretty self-explanatory. You should turn the power off to prevent any kind of harm to you and your stereo. Safety first! To be double sure, Disconnect the cable from your vehicle battery’s negative terminal.

Now you should detach the front plastic frame from your Kenwood Stereo. Just some gentle prodding with a screwdriver will pop it off. Now we move to the next steps.

Once the keys are in place, pull both of them together with the same force. This will free the stereo from the locked state inside the dashboard. The stereo will come out eventually.

Hold your Kenwood Stereo system in one hand and disconnect the wires connected to them. This will take no tools to do.

You have successfully removed the stereo system from your car’s dashboard with stereo removal keys. 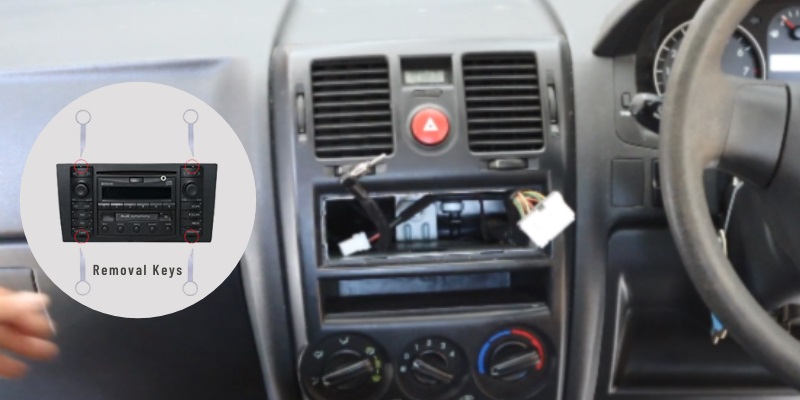 You may know that there are keys to detach the stereo from the vehicle’s dashboard. But you can remove the stereo even without the removal keys. So we’ll also learn how to remove Kenwood car stereo without keys.

Step 1: Turn off the car and disconnect the battery

Just like before, shut down the car’s engine and disconnect the battery’s negative end.

Step 2: Remove the front lid of the Stereo

Use a flathead screwdriver to remove the front control panel. Pry gently so that you don’t break the plastic panel. You can also do it without any tools if you want. Just be gentle with the operation. Once it is open, go to the next step.

Now you should get two flathead screwdrivers to slide them into both sides of the stereo mounts. You can even use two butter knives. Just slide those into positions until you hear some kind of click or pop. Be gentle with those as they are not proprietary removal keys.

Now that you’ve detached the car stereo from your dashboard, you may want to disconnect the cables and connections from the car’s dashboard.

Congratulations! Now you know how to remove a Kenwood radio from the vehicle’s dashboard.

Removing a stereo system/radio from the car can seem very hard if you don’t know how to do it. But if you pay close attention to these steps, it will start to look very simple and easy.

Now that you have learned how to remove Kenwood stereo systems with or without keys, you can apply the method. Thankfully, you won’t have to go to a car mechanic to swap a car stereo. Hope you have a fun time upgrading your dashboard!